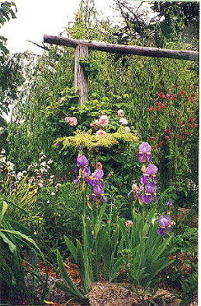 Kees, already in his sixties and Gay, in her second half Century; these two ageing but still active gardeners, kept that big dream to make a little folly. Or was it the other way around? A little dream to make a big folly? Our first planting took place in January 1987. We were still working in the house to make life warmer and more comfortable. My daughter, Michele, was soon to leave with her husband to live and work for a few years in England. Shortly before they left for overseas, they visited us in Middleton for the weekend. When Michele arrived, she thrust a bought plant into my hands with the words, “It’s a kind of Acer. I expect it will die because you are not ready for it, but never mind.”

We put it aside and planted it several weeks later, along with five, four feet tall Cedrus Atlantica we were lucky enough to buy from Ken and Lesley Gilanders, nursery people of Longley, Tasmania. I still could not perceive where to start the “real garden” and chose a small piece of land, half way up the driveway, that had been cleared of bush at some earlier time. This cleared paddock had bush and a fairly constant running creek at one border; a very ugly, bare, steep hill on the opposite border and the far side from the road led into a walkable, natural bush path. On top of the hill, sitting like a pimple was the second of the three pickers’ huts. I have planted this hill three times, once with several hundred, inch high, heaths, another time with a planting of the flowering gum, Eucalyptus ficus fiticolia but both plantings were complete failures. Another attempt was to scatter several pounds of wild flower seeds but the result was equally unsuccessful. The hill remains an ugly sight with bracken and “sags” growing strongly. In the last few years a few stray seedling wattle trees have settled there, carried by birds or the wind from the natural bush. I will now leave it to nature to cover up the scar! Let me get back to the first momentous planting.

Two or three weeks after Michele had presented us with the Oregon Maple, our son, Matthew, came to stay with his his girlfriend, Caroline. I suggested that we all should go down to clear the “first paddock” and try to rid it from the ubiquitous sags and to initiate the first plantings in the Middleton garden. The mens’ eyes lit up at the thought of a carefully controlled burn off but I dampened those ideas by issuing everybody with pickaxes, forks and spades which I had found in the big old barn. These utensils were all old, rusty and bent. Out of the corner of my eye, I noticed Matthew putting a box of matches into his pocket.

Many hours later I named the paddock “Lady Caroline’s Mini Aboretum” as I watched the big clumps of sags smoldering in the light of the setting sun. Caroline and I had stuck religiously to pickaxing out the wretched sags whilst closing our eyes to the six foot flames created by the men folk. They stood, with contentment in their eyes and watched the diminishing flames. The next day we planted the trees with good soil and blind faith. The faith was not to be destroyed. The trees have flourished, despite nibbling carpet sheep and rabbits and the garden has been renamed “The Mini Aboretum” as Matthew is now married to Ann. Today we mow the grass often enough to keep the sags at bay, the only ones not to return were the few that Caroline and I pickaxed.

As the months passed, I gained some confidence and my enthusiasm grew. The first two years were a lot of hard work. Kees delayed his retirement and therefore was going to his office five days a week. My weekends were largely filled up carrying out my duties as a Marriage Celebrant. We found ourselves rushing down on Saturday night, sometimes quite late, only to have to leave on Sunday night. It became quite frustrating. I was the first to resign, reluctantly I must say, as I thoroughly enjoyed my interesting vocation. Finally, Kees, a structural engineer, felt it was time to put away his architectural plans. He retired and immediately started to badger me to help him make a proper garden design plan. 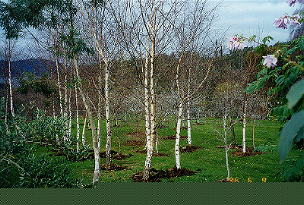 Kees pestered me for so long and hard that one night I quickly said, “All right, draw up what exists and I will write in what we will plant and where.” To be strictly honest, I had no idea how the garden would pan out, although there were a few ideas chasing around in my head. When I sat and looked at Kees’ neat plan, showing the Radiata conifers, the house, the orchards, the big dams on top of the hill, the pickers’ huts, the bush, the barns and the driveway, my mind went completely blank. Feeling irritated with myself, I grabbed a pencil and vaguely wrote in professional sounding words.

“Here,” I said as I scribbled, “We will have a white trunk garden. We will use mainly Betulas, perhaps special ones like Jackmontii. That will look lovely when we look out the sunroom windows and watch the birds feeding.”

It will be impossible to put a pond there because of the way the land slopes. You will end up with a dike larger than any in the NetherlandsKees looked slightly stunned, “But what about all the apple trees? And what is Jackmontii?” “The apple trees will all have to go and Jackmontii is a special Birch that has a very white trunk,” I replied with an over patient voice. “You insisted I go through this exercise, Kees, and so I will,” I was beginning to get quite enthusiastic as my creative juices stirred. I made a very large circle to the right of the Birch forest. “This will be the ornamental pond as it is already obvious that the dams are too far from the house for the water garden and are now too full of your trout to be used for anything but fishing and watering the gardens.” Kees has stocked the dams with rainbow trout fingerlings within a few weeks of our purchasing the property.

“It will be impossible to put a pond there because of the way the land slopes. You will end up with a dike larger than any in the Netherlands.”

“But that’s where it has to go. It must be possible,” I argued, “You are always telling me I can’t do this and I can’t do that but you don’t ever say what we can do.” I read once an interview in an English magazine with a woman who was creating her country garden. The one quote in the article that jumped out at me were her remarks about the chap who came once a week to help with the garden. “Ernest is absolutely marvellous. He never tells me I can’t do this or that. He just goes home and thinks about it and comes back, the following week, with the solution.” I fleetingly mused, as I read this astonishing statement, “I wouldn’t mind swapping Kees with Ernest every six months or so!”

Every proposal I suggest is always answered with a negative. Sometimes Kees’ retort, “You can’t do that, it’s in a rut, it’s too steep, it’s too big to move, its too small, it’s too expensive,” is true but many times I have insisted and it is surprising how often the answer to the problem has finally been produced by Kees and hence acted upon. I must hasten to write that we are generally a good combination in the garden. I give the orders and choose the plants. After we have ironed out the difficulties, Kees is the most wonderful planter and very cheerfully works long hours, carrying rocks, carefully planting all the little plants I have chosen and with patience, moving the edges of the garden beds over and over again. We squabble like young children but at the end of the day, we will come into the warm house, tired and satisfied.

We first tackled the existing cottage gardens around the house, trying to remove the oxalis [an impossible task] and twitch grass [possible with patience and hard work] which were strangling the surviving roses and hydrangea bushes. When I hacked some of the weeds away, I was delighted to find a straggling Tree Peony, Helleborus [Why do we still call it Christmas Rose in Australia when the flowers delight us so much in the middle of our Winter?], ornamental Angelica which fast became a weed with our rich feeding and blue and pink forget-me-nots everywhere. The aged Birch tree, planted too close to the house and the large Rhododendron, “White Pearl” continued to grow strongly. The one other Rhododendron that existed in the old garden, “Sir Robert Peel” persisted in getting sicker and sicker and was subsequently dug up and given away.

I give the orders and choose the plantsThe mammoth white Hortensia Hydrangea, planted next to the front steps burnt very badly that first gardening year as the winds came howling around the house. We had lovely surprises in our inaugural Spring at “Forest Farm”, the Wolfe’s name for their orchard farm. Many dozens of daffodils pushed their way through the soil in odd places. This was doubly thrilling when they flowered and I discovered they were of various old fashioned specie. There were doubles with their petticoats coloured pure orange, yellow or white and others with very wide skirts. The miniature varieties, some with two heads facing away from one another or looking down demurely to the earth from which they had sprung, these perhaps are my favourites. They seemed to have mixed themeslves up and so made a variation on the same theme. There were also some clumps of Hybrid daffodils with slim pink or flaring yellow trumpets. To me, when I compare the the hybrid daffodils to the delicate beauty of the specie Narcissus, they are rather stodgy and smug. Of course, I have to admit, the little thin stems of the specie do make them fall flat on their faces and muddy their finery if we have a wet and windy Tasmania Spring.

But I still remember the thrill of driving through the gates in that first Spring at Middleton and seeing little patches of yellow gleaming in the late afternoon light. We had not been to the property for several weeks due to commitments in Hobart and those little daffodils flowering so bravely through weeds and long grass became my blazing beacons of hope and courage. With enthusiasm rekindled, we began to plant the “Home Orchard Garden”