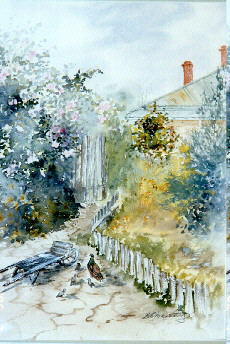 Kees and I created a pattern in our life that helped us to manage the two households and gardens. Before our retirements, this pattern often became hard to maintain. After we both gave up work we gradually slipped into a lifestyle that was both tiring and fulfilling, I fear we became frequently boring to the outside world. There was no time for my past political pursuits and no time for socialising. Our thoughts became fully taken up with the two properties and the children who were, Oh! so quickly!, becoming adults.

In the beginning I had to convince myself that plants were much easier to get on with than political colleagues. After all, they never answered back or argued with you and their only ambitions were to please the bees and me. The mistakes we made were reversible and the magical moments we experienced will last in our memories for ever

Sometimes I walk the gravel or grass paths through the six acres of ornamental gardens and wonder at the rapid growth and beauty that is our creation. There are moments when all is still and quiet and the only thing to be heard is the busy chattering of the blue wrens or the song of the ground thrush that comes back every year to run around me as I garden, hoping for the long and juicy worm my busy Dutch hoe may bring to the surface. And I wonder why is it that the worms are so thick and pink in the country and brown and puny in the city? Maybe the answer is the same as for myself, I also have become fat and juicy despite all my physical work in the garden.

Let me tell you about one early magical moment in the “History of Middleton”. During the first months we were only able to squeeze in odd days and hours to drive down to Middleton. We had commissioned a merry band of painters and carpenters to help us in the renovations and it was difficult to not only keep a check on their work but also to stop them from dashing off to another job. We cajoled them into granting us a few hours a week before they went away to keep another client from committing suicide. Whenever we could we would travel down in the late afternoon after Kees finished work. One afternoon we were able to make the one hour journey to Middleton after lunch and thus we travelled into one of my memories.

One of the painters working on the house was a lovely chap I christened the gentle giant. It was not that he was enormously tall, probably about six feet but everything else about him was colossal. His hands and feet were immense, his foghorn voice was as deep and strong as the most wonderful opera star’s singing voice. His good heart was as broad as his shoulders. This particular afternoon, Kees and I walked through the garden gate and were greeted by the rest of the crew who were sitting on the back lawn having a smoko. Kees joined them on the lawn and I strolled round the small existing garden. When I reached the front of the house where the old fashioned roses were continuing their battle against blackspot and mildew, I was presented with a delightful sight.

There was our gentle giant, a few pink roses disappearing within the compass of his huge hands and with a very embarrassed expression on his face. “I was just picking a few roses to take home to my lady friend, it’s our anniversary today, the day when we first met. I hope you don’t mind,” he boomed out in his fog horn voice.  I reassured him I was delighted for him to take the roses home, that the bushes would be all the better for having a pruning as they were so neglected and showed him where to cut the stems.The picture of those enormous hands, my secateurs completely hidden from view and the large head bent over the rose as he searched to find an outward looking bud, that is a representation of the magic spell that weaves itself on all people who visit and stay a while at “Kibbenjelok.” 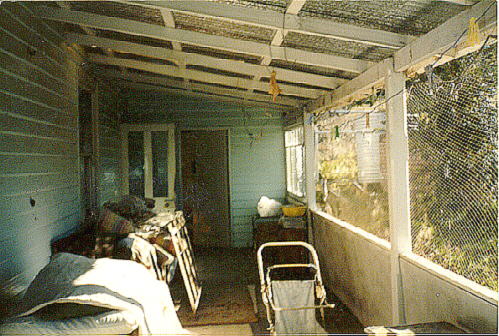 Another story involving our “Homo Giganteum” was the time we wanted to paint the sunroom. We had removed the fishing net that was hung to keep out the birds and replaced it with reproduced windows and had lined the area with Tasmanian pine boardings but I wanted to paint these in a special colour. We had chosen the colour scheme from those little cardboard pieces you are presented with at your local paint shop but I was worried that it would not be the exact colour I visualised when it was painted on the very large area of the sunroom. Kees, knowing I was nervous, offered to drive me down in the morning.

On arrival, my heart nearly jumped out of my mouth – the colour was completely different to the sample but luckily the painters had only just started smacking the vile apple green paint on the wall.  “Stop! Stop! , I shouted, “That’s completely the wrong shade.”  The head painter stopped, took out a cigarette, lighted it and raised his eyes to the skies, looked at the other men and said in a despairing voice, “That is the colour you said.” He stared at the wall they had started to paint and looked pointedly at his watch.

She says it is not misty enough“Come with me,” a voice boomed at me and I went outside with the giant who was carrying the large pot of offending paint. Again I marvelled at those gigantic hands dripping in very carefully a few drops of ochre, black, blue; only tiny drops and those hands as big as the paint tin, stirring the few drops in to the horrifying paint. He was so patient with me and every now and again he would return to the sunroom and make progress announcements to his smoking workmates who were lolling on the floor, basking in the sun that streamed through the windows.”She says it is not misty enough” the voice rang out or “We are nearly there, just a hint of coolness is still needed.” Another time the world was informed “A smidgen of mystery is still absent. A wiff of the Sottish moors.” The lovely part of it was that my friend was so serious and earnest he could have been choosing the paint colour for the Sistine Chapel in the Vatican. Finally, he created exactly the hue I wanted.

Our merry band of helpers disappeared for several weeks after they finished painting the sunroom. During their absence we arranged for the laying of a special drugget matting to be put down in the sunroom. This carpeting, that I had seen advertised in the “Vogue” magazine, was only obtainable by purchasing from a Sydney firm. We arranged for a Hobart firm to lay all the various carpeting throughout the house. Kees and I travelled down to see how the floor coverings had turned out. 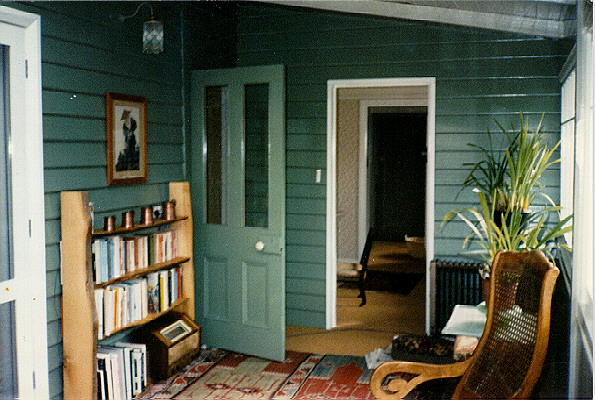 On entering the house I could hear that our friends, the workmen had returned to our project. Very pleased at the return of the wandering gang and thinking that the final phase may be on the near horizon, I hurried out to the sunroom where the voices were coming from with words of delight and encouragement forming on my lips. I was struck dead in my traps. Covering the floor were machines of every type, all the tools of their trade. There were sanders, machines for punching in nails, pots of paste [ they had been wallpapering in the bedrooms] a sawhorse and shavings, nails, blocks of wood and paste rags were all over the new floor covering.

“Do you know that I had to send to Sydney for this floor covering?” I asked

They looked at me with amazement and said they would clean it all up. They explained that they had thought it was only underlay and as it was raining it seemed like a good idea. I stomped off to pick off the black spot leaves from the old rose bushes.

The garden had the usual calming effect on my temper and when my friend, the giant, came out, apologised most profusely for the misunderstanding and asked me where he could find a broom, I was able to grin at him and tell him to forget it that I would sweep out when they left. It took a good hour to clean up the shavings and the mess. The builders had removed the machinery and all became ship shape again. A few days later Kees and I decided to rush down unexpectedly again. It was another rainy day and the swamp gums in our bush were glistening in the watery November sunshine as we drove up the driveway. The tiny apples were beginning to show up on the apple trees and when we walked into the cottage garden, I could see the roses were looking all the better for the attention they had received from me as I worked off my indignation of several days earlier

Kees and I walked into the house, eager to see how the wall paper looked in the “blue bedroom”. We could hear the gangs’ paint bespatted transistor blaring out the latest hit tune and “the boys” singing or whistling along with the pop artist. We walked out to the sunroom, happy in the thought that things were really moving and the end was in sight and there found the merry gang had moved back every piece of machinery, paint pots, paste containers, nails, rags, blocks of wood and sawdust onto my exclusive drugget carpeting.