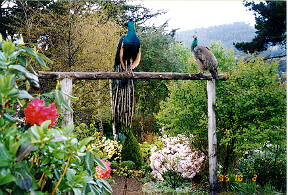 The first birthday I celebrated after the purchase of Middleton became a momentous occasion. Matthew, our gentle hearted son and great animal lover, gave me, with great excitement, two peacocks. The birthday gathering of the family was held at Sandy Bay and Matthew arrived with two large white bags, tied with orange garden string. He thrust a piece of paper into my hands. “This is all we could find in the Library to copy and you’d better be careful opening the bags, Mum, I think they are still alive.” Matthew, still the child that came home with a kitten for me as a Christmas gift, looked extremely proud of himself.

I thought to myself, “We have quite enough cats with my darling Rosie and her proteges down at Middleton and fifteen years old Calico at Sandy Bay.” “Perhaps you could sit in the old chook pen to open the bag,” warned Matthew.  I took a hurried glance at the piece of paper in my hand. Matthew may have given me anything – puppies, guinea-pigs, ferrets.  How relieved I was to find the brief article was a short history of Peafowls. “The poor things trussed up like this,” I exclaimed, as we walked through the garden to the abandoned chicken. “This seems a bit cruel, Matthew.” “That’s how the chap who sold them to me handed them over. He said they would be all right. And by the way, I could only afford to give you one, Papa gave you the other.” Sitting on our heels in the very low chicken pen, we released Bill and Ben. They were reasonably mature birds, old enough to have their beautiful tail feathers, if said feathers had been still attached to their bodies. I had never seen two more bedraggled creatures brought home by Matthew. They looked at me with baleful eyes so I quickly crawled out of the coop. “The man said they would lose a few feathers,” Matthew said hesitatingly, “They lose feathers at this time of year anyway and will soon start growing them again.” We went inside the house and I read the photocopied article which was not an enormous help. The essay told me that the blue peafowls originated in India and that the cock was sexually very demanding on the hen and they liked to sleep perched high in trees. “I hope it won’t be too cold for them down at Middleton,” I remarked after reading the item and learning that the beautiful birds originated in India, “And I wonder what they eat?” “Chap said, anything – chook food, vegetables, bread,” Matthew replied. “One thing else, apparently they like to sleep up high.”

I had never seen two more bedraggled creaturesWe took the peacocks down to Middleton the next weekend. Kees put them in with the hens in the chicken complex that was there when we purchased the property. The two pens consist of chicken wire held together by very weathered thick lengths of wood. I consider them an eyesore, Kees thinks they are marvellous. One I named “the Black Hole of Calcutta,” the other was a good sized run. The two areas are covered in decrepit iron and I found young banana passion fruit plants growing up the sides of the pens. I have encouraged this to cover the whole of the two areas and it really is a marvellous sight to see the long yellow fruits hanging through the circles of chicken wire. It looks rather like a living curtain or wall paper and is the only attractive thing about the chicken pens.

The peacocks arrived down at “Kibbenjelok” minus all their tail feathers but I thought, “Too bad! And not a great hardship as they have no peahens to show off to,” I am not so ignorant of their behaviour now! Peacocks will display themselves to anything that moves; the ducks, the hens, the other male peacocks, me, Kees, the cats and one fine day I even saw Charlie doing a wonderful dance to the car. I can only presume he saw his own reflection in the duco. Mating season for peafowl goes on for about five months and it is at this time the peafowl are at their noisiest and dirtiest.  It is also this time that I threaten them by inviting them to join the family for Christmas dinner in a particularly participating role. When my patience with their nuisance value is at its weakest, I will see a cock displaying himself on top of a rose arbour, his wonderful tail shivering and brushing the blooming “Clair Matin” rose. The vibrant blue of his chest and the green eyes of his tail look absolute splendid amongst the soft, pink blooms. The two white peacocks (bought as a hen and a cock} knowingly choose the other side of the arbour for here “Silver Moon” scrambles over the log supports of the arbour. White, with long yellow stamens, I am sure this rose was created to be a foil to the magnificent cream and snow white tail feathers of the white peacocks. We now, at the time of writing, have fifteen adult peafowl and nineteen peachicks.

Several years ago we were driven to sell nine fowl to reduce their numbers for the mess and noise had become unbearable. It is most unfortunate that we have a verandah around the house and do not live for the whole week in the house. Peafowl, coming from a much hotter climate than we experience at Middleton, need the shelter of the verandah during the rain, snow and hail storms that are frequent happenings at the “farm.”

The first time Molly, our original peahen was found, after a long absence, in the long grass up near the duck pond with a family of three chicks, I was so excited and happy. I was also surprised that there were so many chicks. Somehow I had imagined that such big birds would only lay one egg. How wrong I was. Molly will have two clutches during the five-month mating season and this may represent ten chicks during one year. The first born are told to fend for themselves after four months of Molly’s excellent mothering. The second batch is much luckier and remain by Molly’s side until she sits again the following season. Now that her descendants are producing their own families, I suppose that we must count ourselves lucky that we have a wedge tailed eagle, sea hawks and a white peregrine living in the hills surrounding the farm. They vary their sumptuous diet between ducklings (nearly 100 percent), peachicks and ordinary chicks. I have watched the peahens, perhaps at the time eating out of my hand, suddenly stare into the empty sky, their neck feathers puffed out into a huge ruff. Quite a few minutes later, my weak human eyes will pick up the dot in the sky that comes circling closer and closer to the house, swooping gracefully as it inches closer. One or two peahens remain fixedly staring up into the horizon and making a soft, clucking noise and the rest of the birds dash off in several directions. The peafowl has no answer to those talons and is only able to stand and watch as the little chick is carried triumphantly back to the aerie where the eagle’s fledglings await their meal. The stamping of the peafowl across the tin roof in the early morning hours, the strange shrieking of the mating calls are a constant annoyance to the family when they come to stay. Kees and I are immune to it now, just as we don’t hear the noise of cars at the Hobart home.