Skip to Content
Home History Chapter Six – Down to business 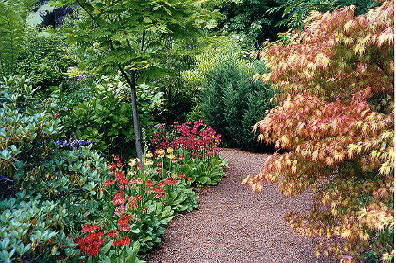 The first “Open Garden” was in 1989 when the Federal body of the A.H.G.A. held their annual conference in Tasmania with the theme “Important Gardens of the Future.” We were asked to open the garden for delegates to the Conference to observe a garden in the making. The trees we had planted in the orchard garden were knee high babies. Most of the apple trees were still flourishing in their built up lines which marched lengthways up the acre orchard. The apple trees had been planted on top of small hillocks as there was a bad drainage problem from water draining down from the adjacent hill.

Kees made me plant on these hillocks to give the plants better drainage. The whole area has been French drained and there is improvement but we still have trouble from an underground spring that wells up when the rain comes down in buckets. Millimetres of rain are a frequent occurrence at Middleton.

To my horror I observed lines of soldiers marching in columns up the hillTasmania has been experiencing bad droughts in the last few years. The garden in Hobart has dried out so much that despite good watering with sprinklers, it is extremely hard for the gardener to help moisture to get through to the subsoil. It is a well known fact that people connected to the earth are always bemoaning the weather conditions. So I have a perfect scenario, “The lack of good rain is killing the garden at Sandy Bay” I will groan and in the next breath, “Seventy millimetres of rain fell at “Kibbenjelok” last night and tomorrow we have an Open Day!” In the first years of our plantings of trees and shrubs, Kees made me place the seedling under the protection of an apple tree. One day I stopped planting and looked at the Orchard Garden. To my horror I observed lines of soldiers marching in columns up the hill. The Acers, the Rhododendrons, the Magnolias all stood to attention, one behind the other, interspersed by large Tasman apple trees. We had been discussing the laying of paths and Kees was most annoying, persistently demanding that I tell him exactly the widths of the paths and where they should be placed. At the time, there was only one dirt path travelling across the garden, with an eight inch hose connection sitting up in the middle of the thoroughfare. 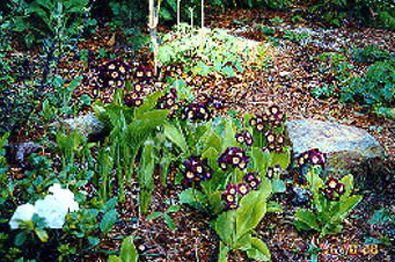 I am unquestionably aware that we did everything wrong. I have read enough gardening books to know that a “good” gardener first attends to the drainage, then throws a hose length on the ground and pulls and kicks it until the shape becomes the correct contour of the future garden bed. After that the wise gardener spends nights with a plan and a pen, placing on paper the position and the curves of the paths and garden beds. The designer will make the accesses meander here and there, around corners to give the garden observer a wonderful surprise as he discovers room after room of wonderful garden paintings. Amazingly, despite doing everything backwards, this is what we achieved.

The trouble is that I am unable to resist the beautiful plants that I find in nurseries. On occasions I will first decide exactly what plant is needed and where it should be positioned but too many times I have triumphantly carried home a “real find”. Poor, suffering Kees asks me “And where am I going to plant it?” 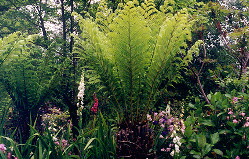 I have really dragged you off the unmade or made garden path so back to the time of big, decision making. When I looked at the regimented lines of plantings, I knew, in my heart, Kees was right. The time had come to get serious about the garden as a cohesive entity, to let the garden begin to crawl. But my thoughts constantly returned to the original Great Plan, to build a water garden before I died.

“What about the water garden?” I asked Kees. I got very little feed back and the next few weeks saw a campaign of nagging by me and practical refusals from Kees. My unworkable suggestions were treated with contempt. “Better get the orchard garden worked out first” Kees would say and so I shut up for a while.

“The first thing is to cut down some apple trees,” I retaliated, “the plants are getting big enough to do without so much protection.”

Kees looked horrified, not at the thought of the work but he hated the desecration of felling trees that were so beautiful in Spring with their large, pale pink blossoms and the big, red apples that glimmered in the autumn and dropped uneaten in the grass to trip you as you walked up the long grass paths.

“It is only cutting down several hundred trees, Kees. That will leave about two thousand trees for the birds,” I tried to persuade him. At last, very reluctantly, he agreed to cut down about twelve trees and all Sunday the noise of the chain saw echoed around the wooded hills. The darkness of night had descended upon us when we packed the cutting tools away and returned to Hobart.

I will never forget how the orchard looked when we arrived at “Kibbenjelok” the next weekend. The little Rhododendron bushes and the lovely weeping Acers faded to absolute insignificance. The grass had turned to huge muddy patches, the whole area appeared as if a bomb had hit it. The general appearance was not helped by the limbs of the fallen apple trees that lay in untidy piles. Kees looked at me with great sorrow and condemnation in his eyes.

Later in the day, I photographed the bomb site with a video camera, in the hope that the desolation was not as bad as I thought. Looking at the video now I note it was as horrible, but observe it is remarkable how quickly the area recovered. And that is how the paths were formed and the garden began to grow up and start looking like a real garden. Of course, many more apple trees were discarded but it remains a fight with Kees to this day to remove every twig. 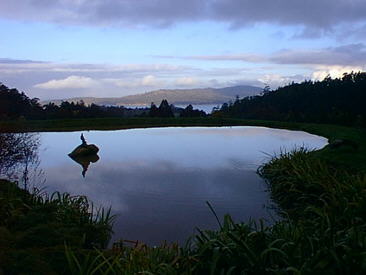 We have retained two lines of apple trees, underplanted with Rhododendrons and various ground covering perennials such as Hellebores [Christmas Rose], Trilliums, wood Anemones and Meconopsis [Himalayan Poppie]. These trees we are training to form an arch overhead but at the time of wr iting, March, the weight of the big, red Tasman apples have brought the overhead, meeting branches very low, despite our severely pruning them last year. We have to practically crawl on our hands and knees to walk up the grass path. Maybe that is not a bad thing to do as the Tricurtis[ Toad lilies] are in flower. These lilies have flowers all along their arching stems, with little purple or white flowers interspersing lime green leaves. The brown freckles inside the quietly beautiful flowers give a certain liveliness to the blooms and are best seen by looking into them from a low position.

Dirt paths became brown gravel walkways, sandstone stepping stone paths were placed through the grass and boulder edges were placed along garden borders and moved again and again. While all this manual labour was taking place, my mind was still creating the sheet of water I wanted in front of the house.