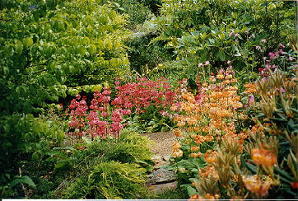 The road to “Forest Home” was two kilometres of long, very rough gravel and travelled through stately, stringy bark eucalyptus bush. Passing two shanty “picket” [pickers’] huts, it finally finished its bumpy journey at the house which sat quietly slumbering, surrounded by apple trees. The two small gardens in the front and the back of the house were completely covered in Oxalis and the rose bushes in these gardens looked very sad with their burden of carrying so much mildew and black spot. Down the side of the verandah was a brilliant planting of manferns and these hosted three other forms of bush ferns.

The cottage garden boasted an old picket fence around one and a half of the four sides, the rest of the garden was enclosed with iron uprights and chicken wire and even barbed wire had been used in some parts to help keep the rabbits out. Beyond a delightful but decrepit garden gate stood two Rhododendron bushes. One of these was huge and healthy [“White Pearl” or “Pink Pearl”] and the other was a large and sick looking Rododendron “Sir Robert Peel” and I noted these with some interest as I hoped to grow specie Rhododendrons in my dream garden. Another plus was the absence of thrip and it was not hard to reason why; hopping busily and chirruping incessantly to one another were dozens of blue fairy wrens, the husbands with peacock blue chests and the dowdier but plump wives equally vocal in their courtship. Everything under foot was wet, wet, wet.

We both fell completely and absolutely in love with the property.The house, red tin roof bright in the winter’s sun, boasted a bullnose verandah around the cream weather boards of the dwelling. The underside of the bullnose was painted that particular shade of pink that you usually only find in a musk lolly. A member of the previous owners’ family told me later that the paint had been left over paint and I couldn’t help wandering, “Left over from what?”

The interior of the house was very daunting to the uninitiated me. Although the sun was shining brightly, the gentle rays quietly giving you the warmth from the cool Tasmanian winter’s day, the rooms were freezing. The dwelling had been unoccupied for several years and I felt the bleakness. The bathroom was reached by going outside through the kitchen door, the walls were made of flattened kerosine tins and painted a vivid yellow. The outside doors of the main house had lavatory glass in them to let in more light. The kitchen, painted grey and bright cherry red had no cupboards to speak of, the sink was placed next to a completely blank wall although there was a cottage window on the outside wall which looked out past an orchard to the hill of lush bush. The room was dominated by a working Lux wood stove, whose chimney still leaks in the rain. A lonely small refrigerator stood against the other wall. 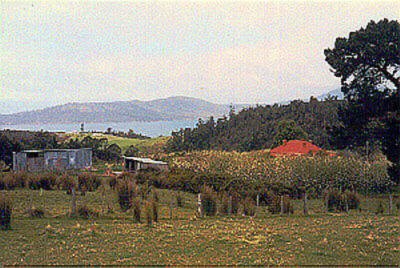 But there was a pressed iron ceiling in the front parlour and this “best room” had a marvellous example of the art of Faux marble, the wood surrounding of the fireplace painted to represent marble.
There were fire places in every bedroom and Baltic pine ceilings. The fourth side of the outside bullnose verandah had been enclosed with half a wall of timber and instead of windows, fishing net was nailed up to the to enclose the opening and so keep out the birds. From here the view was delightful as you looked over another apple orchard to the silver blue calm waters of the Channel and then to the South of Bruny Island. A large well shaped Birch tree stood very close to the front of the house, separated from the orchard by another chicken wire fence.We both fell completely and absolutely in love with the property.The agonies of that afternoon! The real estate agent advised us to make up our minds immediately as there was a developer after the property. This was quite true, I was to find out later. Kees, who had driven me mad all our married life by making me go to every shop in Hobart before I purchased a tea-towel, had to make an instant decision. I hesitated and spoke of the forty acres of semi rainforest, the acres of orchards, the ten acres of professional raspberries. There were a hundred and thirty-six acres of land altogether and it seemed a little more ambitious than the five to ten acres of ornamental garden, with pond, which was in my mind.

During the drive back to Hobart I was to say repeatedly, “Yes, I know that it is peaceful and quiet and beautiful but it is an awful lot of things to have to look after. You are still working and I work in the weekends Iand we know nothing about orchard management or building fences! I think I could make a garden there, but I don’t know, Kees.”

Kees only said, “See if the children can come for a family discussion tonight,” and left for work.

The talkative sales person called at our Hobart home an hour later. He once more pressed on me the urgency of our making a decision and then we sat at the kitchen table and he told me some funny stories of his past life. Our four children began to drift in from University and school. I explained briefly the situation and they stared at me as if I was mad and went to their bedrooms. And so the real estate agent and I drank tea and chatted about life in general until Kees came home. An hour later, almost as in a dream, I was watching our third year law student son drawing up a property agreement and Kees going to the refrigerator for a bottle of champagne. During the following weeks my heart soared from great excitement to strange emotions of apprehension and doubt.